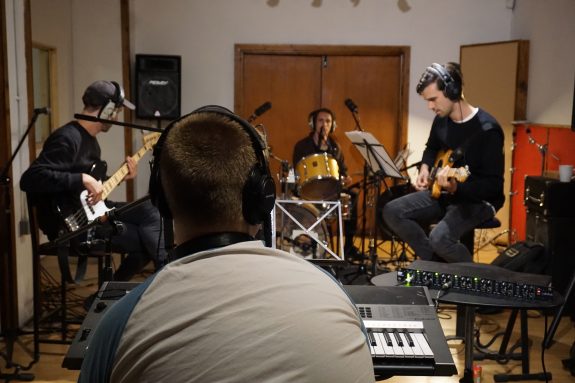 I first encountered Matthew Nealis around five years ago, when he arrived as a member of the newly-founded Young DaDa Ensemble, a weekly inclusive musical group for young people.

Matthew first revealed to the group his exceptional musical talent as a keyboard player. He could easily and quickly play along with anything he heard, could transpose to any key, and had absolute pitch. He would also play unusual chord voicings, which suggested a very natural musicality that comes from what you hear, rather than just what you are shown.

Matthew smiles for the camera. He has a boyish round face and close cropped hair.

The first original song that Matthew played for the group was ‘I Don’t Deserve Anything’. As with all of Matthew’s songs, it came fully formed, as fully developed on that day as it is today (I later learned that this was – astonishingly – the first song he had ever written).

There was initially some confusion, as we were all under the impression that this was a famous song that Matthew had decided to sing for us.

It took some time (and even a Google search that evening) to fully accept that yes, this was a Matthew original. It was then that we realised that Matthew had a very rare talent.

Matthew played with the Young DaDa Ensemble for around 3 years, and then left to concentrate on joining college. I’d occasionally talked to colleagues about the idea of recording an album of Matthew’s songs, but it was only after he’d left the group that I realised that this might only happen if I made it happen.

I spoke to DaDaFest and Drake Music who both agreed to contribute to making this happen – variously through the DaDa Mentoring Scheme, DaDa’s Development Grant, Drake Music’s Go Compose project, and some financial contributions towards recording and post-production costs.

Choosing the material for the album
I started to go round to Matthew’s house every week to begin the process of choosing the songs for the album, and getting Matthew ready for the recording sessions. It was only during these visits that I started to fully appreciate how Matthew writes his songs.

Matthew had a folder full of songs – all typed and printed out, never any notated music or even chord names on the sheets – and would play new songs for me every week. During December he wrote a new Christmas song every single day.

I’ve never fully got to the bottom of Matthew’s exact compositional process. I believe he writes the lyrics first, and then as far as I can tell he just instantly knows how the melody and harmony will sound. No drafts, no rewrites, not even trying out a chord change. The first time you hear the song might be the first time he hears the song.

Matthew is a true keyboard player, rather than a pianist. He knows how to programme a keyboard inside-out, and all of his songs are written to be played on the keyboard, often utilising all of it’s functions.

Just as a song’s music will come to Matthew fully formed, so will its arrangement, and he is so proficient at programming his songs into the keyboard, that I believe I once saw him write and programme a song while he was talking to somebody, while another piece of music was playing in the background.

With this in mind, I was unsure whether to involve any other musicians in the process, or to just keep it pure. In the end we decided that having a real live band backing Matthew (and his keyboard) on a few songs would help to keep the album varied, and so we drafted in guitar, bass and drums to augment and replace elements of Matthew’s original arrangements.

Matthew and the band record in the studio

We managed to whittle the songs down to 13 that we felt really captured the range of Matthew’s writing, and headed into Ark Studios in Liverpool in May 2018. Matthew proved to be as efficient a recording artist as he is a songwriter, and we recorded all 13 tracks over two long afternoons.

Track-by-track
Here is what Matthew had to say about the process, and some notes on each song

I had a fantastic time in the recording studio, I really enjoyed recording my songs there and playing with the band made my songs sound much better.

It reminds me of when I was in school and I hoped that Belle from Disney’s Beauty and the Beast had gone to get the school bell. My Belle’s Gone for the Bell video is amazing.

Matthew’s first single, this insanely catchy disco number is a perfect example of how Matthew’s lyrics can be surreal and yet also feel
somehow logical within their own world.

2) I Don’t Deserve Anything

About when everyone makes the wrong choice they lose everything and they make people sick with worry.

The song that started it all. A heartbreaking ballad about regret that feels both specifically self-reflective, and completely universal. Also his second single, with a powerful one-take video.

3) Am I About To Give You Something

About elections, Donald Trump and Theresa May not letting 16 year old students have the right to vote as we’re too young.

A complete change of pace for this 80s rocker with surprisingly political lyrics, with an overall message of fairness and equality. “Give 16 and 17 year olds the right to vote in all elections and referendums”.

My best term in school as it’s a good month because it’s an exciting time and you have to be ready for it by going to sleep early.

Matthew has an encyclopedic knowledge of modern pop music, and can recite the tracklisting of all recent ‘Now…’ albums. The sheer quantity of pop music he has listened to probably goes some way to explaining his knack of producing such well crafted and catchy pop songs (even when singing about what time he goes to bed!).

About asking for help when I’m struggling with my work.

A slow burner, it took a while for me to realise that this is possibly Matthew’s most revealing and personal song. The lyrics explain that while Matthew needs help with certain aspects of his life, when it comes to writing his songs he has developed his own set of instructions.

Joining together with someone you love.

A song about engaging with other people, it was perfect that Matthew chose this to also be the title of the album. Music is such an important way for Matthew to engage with others, and the fact that the chorus implores us to join Matthew in the world (rather than the other way around), indicates how his music makes him feel.

Hoping we all go to space one day.

This song has some very powerful imagery: an astronaut going to space but still not being able to leave behind his connections on Earth; the idea that the human race are astronauts on a planet-sized spacecraft. And a great beat!

8) Better Than The Days

I wrote it about my Grandad Ray and Nanny Lily because I miss them as they have died and are in heaven.

A gorgeous intro for another song that I was initially convinced must be a cover. A great example of Matthew’s intuitive knack for song structure and clever key changes.

Is about great rock and roll stars from a long time ago.

Barnstorming rocker that namechecks Tom Petty & The Heartbreakers, The Beatles, Bill Haley & His Comets, Elvis Presley, The Killers and Fall Out Boy (who I guess are vintage to a 21 year old!).

About me being independent.

Probably the most abstract lyric on the album. I felt it was important not to edit Matthew’s lyrics, as they are the window to his mind, and give us such a valuable insight into how he sees the world and the things that are important to him.

Keeping healthy and being in love.

The album’s sassiest song that sounds like it’s describing a tangled love triangle, with an irresistibly foot-tapping backing.

Doing the things I love best and loving other people.

This song could be a huge hit! Massive chorus, great lyrics, stirring middle-8. I quite often fantasise about pop stars covering Matthew’s songs, and this would probably be the first choice.

About feeling ok until it goes wrong and you feel it’s all blown away from you, then you get help from someone.

Emotionally devastating finale about the fragility of love and life, and how everything can change in an instant. “It’s still ok, like all these days. Everything’s alright until it’s blown away”. I’d love to record a
version of this with a full choir one day.

Hear (and buy!) Matthew’s album via this link

This is Matthew’s album. I just facilitated it and so I feel happy in saying that I truly believe that In The World is an important work that gives a rare glimpse into the mind of an exceptional talent, and a voice to an often under-represented section of society. Matthew’s music and lyrics are presented entirely on his own terms, and completely undiluted.

It has been an absolute pleasure to witness such joyous and natural creativity up close, and to help share it in the world.